What is a Robotic Ready Torque Screwdriver?

The robotic ready screwdriver is also fitted with a vacuum pickup nose piece. This vacuum nose piece can be used to suction screws onto the screwdriver and hold the screw steady so that it is ready for attachment. 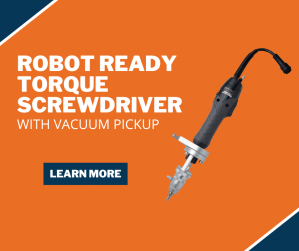 Why use these torque screwdrivers?

The vacuum nose piece on the screwdriver ensures precision fastener placement during the assembly process. It also helps to eliminate many of the errors that can be made by human operators and reduces labor costs.

In addition, a smart power supply or signal controller can be added to the screwdriver system. This allows the operator to obtain vital assembly information such as screw count, good/bad torque, good/bad turns, and other information.